What happens when a party princess meets the same children... but as a different princess?

To be honest, this thought hadn't occurred to me until it was actually happening in real time.

The littles were standing before me and my brain went into overdrive. 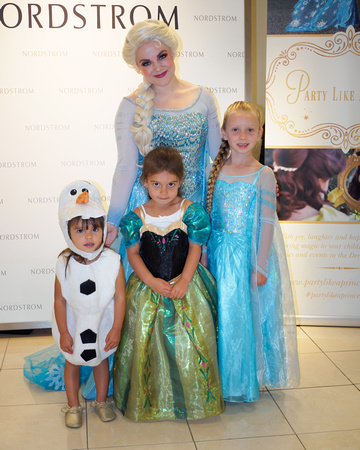 Ok, ok. Stay calm. Who were you before? You're the Ice Queen now but you were Rapunzel the first meeting. Ok perfect. Greet them normally. Ask this character's questions. But what do I do if they talk about the other character? What do I know or not know?

Well it actually went off without a hitch.

All that panic thinking for nothing!

I had a lovely conversation with them, and even got to bring up the fact that Rapunzel told me about three sweet girls who all love the same flavor of cake. "It wouldn't happen to be you three, would it?"

I was greeted with bright smiles and nodding heads. The fact that the princesses were talking about the people they met with each other and that one remembered something about them? I'm pretty sure that was an added layer of magic right there.

This sweet family attended several events of mine - meeting me as not one, not two, but five different characters.

And not one of their daughters ever caught on for a moment.

I'm pretty sure this is one of the best compliments I could ever indirectly receive regarding my portrayal of princesses.

Pulling off this feat was a slightly stressful task, but when I talked to you last week about becoming the characters when I'm performing, I meant it.

And not just in how they would react and feel in a certain situation, but also how they move and speak.

I'll go into that more next week!