The Easiest (and Hardest) Characters to Play

Some princesses are way harder to perform as than others.

Now I know what you're already thinking - "the one with the magic powers is the hardest, right?"

You would be wrong.

In fact, the Ice Queen has several different ways of not sharing her magical powers at the event. Read about them here: "Show Us Your Ice Powers!"

The hardest to play is actually Beauty. But let's talk about the easiest to play first.

Rapunzel is my absolute favorite princess so that makes her the character I connect with the most and the easiest to be. I know her songs by heart, I understand her story the most, and her love interest is shared by me as well (I mean, have you seen him??). 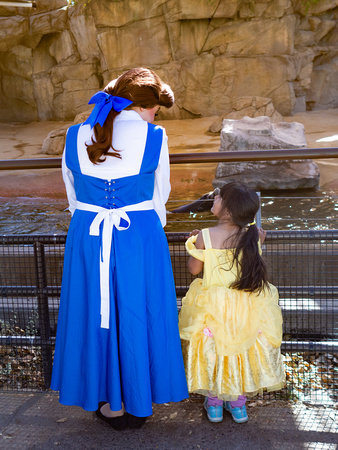 The Little Mermaid is so much fun to be because she has a bubbly personality - pun intended - and has such a fun world that's a cinch to make believable. And the Scottish princess is also a blast because she's the least formal and the accent is so fun to play with. Oh and the Snow Princess? She's coming soon but the one virtual event I already did - a unbelievably good time.

Sleeping Beauty is a bit more difficult for me because of her breathier voice and elegant nature but she's much like the Ice Queen; they're both more reserved with swishier movements.

But Beauty, whether I'm in the provincial dress or ballgown, is the most difficult.

At the end of the movie, everyone is transformed back into humans and the curse is lifted. The prince is no longer a beast.

However at certain theme parks, they portray this character as being back in time when the castle was still enchanted.

So how am I supposed to play this character?

What am I supposed to answer when littles ask "Is everyone still human?"

Which story do I choose?

This is what I've chosen - I'm all for a happily ever after situation so my princess is the current one. The one where everyone is human, the curse has been listed, and the beast is a prince.

And what do I say if asked why they're still in a different form at the parks?

Well they're playing dress up of course!

But it's this because of this confusion that always makes me a little stressy when I'm going to be Beauty.

Little ones love to be inquisitive so they ask a lot of questions about the characters stories. Yes, even the ones about 'missing' parents and why villains are mean.

So why don't we discuss those next week?

But for now, this is my princess perspective...