What Princesses Know About the Modern World

Princesses exist in two times at once.

They are both antiquated and modern... and sometimes that can get confusing.

Which is why asking little ones questions is one of the most entertaining things when you're a party princess.

At my Halloween themed Princess Porch event, I got into many conversations about favorite costumes and candies. 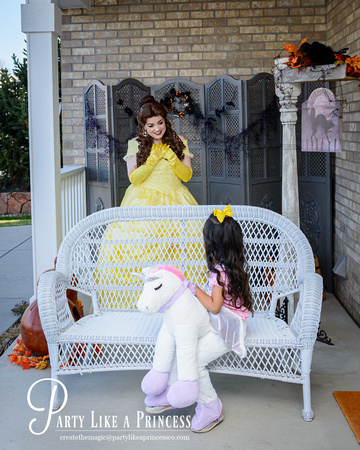 There were so many sweets being rattled off it was hard to keep track - although chocolate and Skittles were popular answers!

But what was the most fun as a princess at these events was to ask, "Oh I've never had one of those before. That must be a specialty in your kingdom. I will certainly try one before I leave, but I must ask... what's it like?"

The answers were always hilarious.

I wish I had a notepad nearby to write down all the other answers to look back on whenever I need a good giggle.

But because I was Ballgown Beauty that day, I knew exactly what to say to the Oreo response.

Their eyes would grow wide and they would get so excited that they've basically tasted something from my very own kingdom.

And it's always so much fun to hear them recite it to their parents as they walk away.

That reminds me... one of the best parts of having princess assistants is getting to hear comments that I totally miss because I've already begun greeting the next group.

I'll tell you about a couple of those comments next week!

MAKE YOUR PARTY 'PRINCESS PERFECT' WITH: